My expectations were already quite high going into this episode, I had heard great things about where Doctor Who is going and I am a very big fan of Peter Capaldi. The trailers looked amazing and there is some great talent on board for series 8, particularly in the way of writers and directors. I loved the idea that Capaldi was going to take the role in a different direction and that Moffat is going to darken the tone slightly. It is safe to say my expectations were met.

Straight out of the gate the new episode displayed brilliantly written dialogue between excellently realised characters. There is something more to every line, little jokes and hidden meanings that you may not catch on the first viewing. I was surprised by just how complex the writing was, Moffat cares very little about viewers who can’t keep up with the unrelenting layered, humorous dialogue. If viewers don’t get it, they don’t get it, you can not switch your brain off and expect to get everything from these episodes. Audiences who expect to be spoon fed, pre-digested baby-food need not watch, if you expect to be told everything without the need to actually use your brain you might as well watch Keeping Up With The Kardashians because all of the conversations will go right over your head. 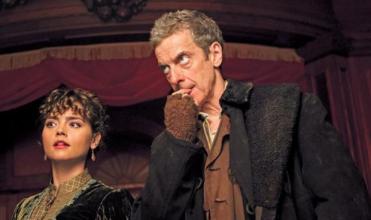 However, though there are many scenes between characters that are deliciously enlightening into their characters that isn’t to say that there isn’t a fair bit of action. The CGI and action budget appears to have gone up. Put it this way, the first episode entailed a Tyrannosaurus Rex stomping through London in the past before spontaneously combustion into ash and flame. The dinosaur actually looked great, because it is the BBC you expect the CGI to be useless, in reality the T-rex looked amazing. Not only that it appeared to be in super high definition. The resolution was so high and the depth perception so well done, you feel almost as if you are in it. The robots were incredibly well done, especially seen as though many of them were just people acting in a wooden, robotic manner. However, the head of the leader of the robots did utilise practical effects as, on one side you could see right into his’ clockwork brain.

Of course Peter Capaldi was fantastic on screen, his performance as the Doctor makes me very excited for the forthcoming episodes. He is magnetic to watch, the interesting little mannerisms and looks, he is never not doing something. Even when he is listening, he reacts to every statement and admission with an expression or look that gives you an insight into his character. It may show that he is concealing something or that he knows more than he is letting on, he is fascinating to watch.

I loved the teases in the episode to the coming explanation as to why Capaldi’s face has appeared in the show previously. Throughout the episode there were moments where he would see his reflection and question where the face came from or if he has seen it before. I call these teases as I am hoping there is more to it than the idea that the Doctor subconsciously chose it when he was regenerating because it was familiar to him. There was another reference to Tennant’s era in that the plots of this episode and one of series 2 are very closely linked. There is an episode in series 2 that features clockwork androids harvesting human organs, which is the plot of the series 8 premier. There is even a moment when the Twelfth Doctor notices something mentioning the fact that the android ship is a sister ship of the Madame Du Pompadour, the spacecraft of the robots from series 2. The Doctor spends time in these scenes trying hard to make the link between these things which seem very familiar, they make quite a lot of it in the episode. Hopefully these moments will be peppered throughout the season, leading to some kind of realisation where the Doctor makes the link between these things and why they keep appearing, as well as why he is identical to someone he has met before.

To conclude, this was a fantastic episode and I hope there are many episodes as  good as this in the coming weeks. If the scenes from the next episode are anything to go by episode 2 will be fantastic. Hopefully the Doctor meeting his sworn enemy once again will bring out the nasty side of this incarnation, which is definitely present.