Dark Water was an incredibly unique episode, it was one of the darkest I have seen, not to mention incredibly sombre and philosophical. This week’s episode was; absorbing, thoughtful and a character driven episode that really hit the spot. The opening to this episode was not only disorientating but also quite upsetting. The death of Danny Pink was shocking enough, what followed was a confusing sequence in which we questioned Clara’s identity, it was revealed that Clara’s behaviour was actually brought on by a dream state and she was only acting in this way because she was desperate for the Doctor to change time. However this still doesn’t explain her behaviour in the clip of next episode we saw at the end of In the Forest Of the Night, when Clara says “Clara Oswald never existed”. Also, what was the reason for the sticky notes all over her living room in the first scene of this episode? They all had generic things from her life on them, names and places from her adventures such as “The Doctor”, “Jenny”, “The Orient Express”.

The performances in this episode were fantastic, with the exception of a short appearance from Danny at the start Capaldi and Coleman carried the entire first 15 minutes on their own. As for the rest of the episode; the afterlife was a very interesting concept to bring up in a sci-fi show. The concept that there is something more after death isn’t an idea that appears in most science fiction products. The appearance and feel of The Nethersphere itself was incredible, the moment when Danny looks out the window and we get the first look inside the sphere was a gripping moment. The CGI to create the millions of sky scrapers spanning the entire surface area of the interior of the sphere was a triumph. 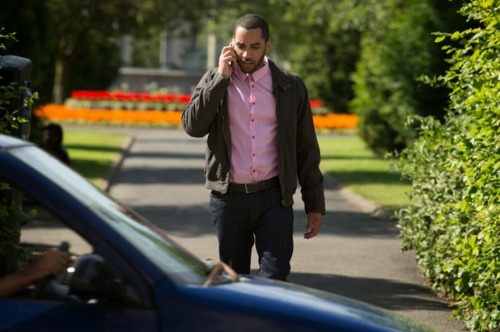 It was interesting to see Doctor Who take on a philosophical tone for a change, if only for an episode. I say this as there will most likely be very little speculation on the concept of life after death in next week’s episode given the fact that we now know that the Nethersphere is Timelord technology. However that isn’t to say that there aren’t still questions to be answered, if the Nethersphere is simply Timelord technology, how can the characters have died first?

Murray Gold’s soundtrack was strong once again, the chorus of singers that appeared with Missy at the end of certain episodes this series popped up once again. That piece creates a real feeling of mystery and like there is something more at work here, it is basically a recreation of the Doctor’s theme when it returned in 2005, the humming would appear when the Doctor alluded to his past on Gallifrey. We also saw a new take on the iconic piece of music that signals the return of the Cybermen, that droning riff never fails to create goosebumps.

Once again Moffat creates a concept that seems impossible to get your head around and a mystery that seems to have no solution and then explains everything in a vivid and satisfying way. An example of this was Chris Adison’s character explaining to Danny Pink how the Nethersphere works. His analogy was that it is like the experience of a baby going from the womb to the outside world. If a baby was concious in the womb they would think that the world had certain characteristics and that life was living in the womb. But then there is something more, it goes on just in a different way.

This was a completely engaging episode I found myself fascinated and absorbed in the story and the concept of life after death  that it initially, appeared to create. Given the huge revelation that Missy is the Master in his newest incarnation the episodes to come should be incredible, I cannot stress how excellent it is that the Master is back. Hopefully at the conclusion of this two parter the Master won’t just disappear for a long time. It would be fun if the Master kept reappearing to cause havoc even if it is just for the odd episode in a season.