This episode saw the first appearance of Harvey Dent, the man who in the future will become one of Batman’s most formidable and iconic villains, Two-Face.  I was happy to see the debut of this character, it is always good to see characters from the comics appearing in the prequel series. This episode can serve as Dent’s origin story as it focussed a lot on him, showing some of his exploits before the disfiguring accident drives him completely insane. However, despite the fact that this episode takes place before Harvey Dent transitions into Two-Face that isn’t to say that the attorney doesn’t show signs of his future villainous persona. Throughout the episode Dent’s coin with heads on both sides makes many appearances. In one moment he tricks a teenage boy into thinking he had a 50/50 chance of going to jail. Dent tells the boy who if he gets heads, there is someone up there looking out for him and he should take it as a sign that he needs to turn his life around. Both sides of course have heads, Dent was always going to let the young man go, however this still shows that there is something in Dent that he likes to gamble with people’s fate on the toss of a coin.

It is scenes like these in which we get deep into the characters that are the most interesting part of the show. The story of the week always fails to capture my imagination like these moments. The criminals are just never interesting, I find it difficult to be compelled by each episode’s villain. I only find myself really focussing in and being absorbed when there is a scene with DC characters from the source material, or character development moments on the most interesting characters. When it goes into a more police procedural area it gets boring and just like any other show.

The Penguin and Harvey Bullock are quickly becoming my favourite characters on the show. Harvey Bullock is the only saving grace in the moments that are just like any other crime procedural show. When things get formulaic and it is Gordon and some other nameless police officer in the station, Bullock’s appearance always turns these scenes around. Donal Logue is magnetic in anything he features in, he has excellent delivery of the comedy lines, he is believable as a bad-ass and is just generally interesting to watch on-screen. The Penguin is quickly becoming an enjoyable presence in these episodes, Robin Lord Taylor was a savvy choice for the character, he gives off a violent demeanour. However they don’t seem to have a grip on what Cobblepot’s music is going to be. In previous episodes his’ theme has been creepy circus, this episode it had a more confusing and erratic style. 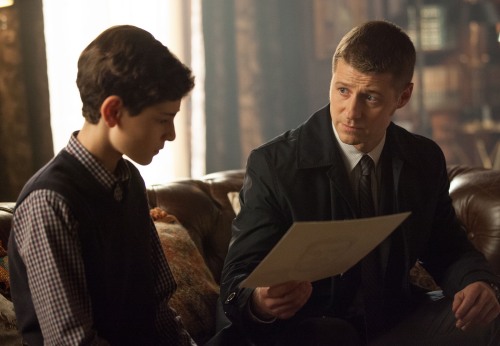 The scene in which Harvey Dent flipped and became violent was well judged but not very well portrayed. I don’t mean to hone in on that one actor, he wasn’t the worst actor in the episode by far, though his acting in that moment was quite exaggerated. It seems they haven’t got a proper handle on these characters, they can’t all be distilled down to one unique trait, a certain look and then the urge to kill. Some have very deep psychological profiles in the comics and no compulsion to murder at all. For example, The Penguin isn’t just a guy with a; hooked nose; a waddle when he walks and the urge to do crime. Although in the comics he is those things he doesn’t kill people, he is a crime boss who gets others do his work for him. 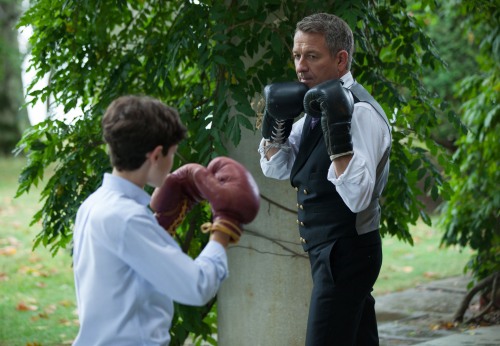 Things are getting into the comics territory now as all of the criminally insane inmates at Blackgate Prison are being moved to Arkham Asylum, some sinister music chimed in when Harvey told James about the plan, the music rose up as the inmates were led off the bus and into the ancient building. This strategic use of music really gave the impression that the winds of change are sweeping through Gotham. The Barbara Gordon storyline just took an interesting turn…it needed to, her storyline was quite boring and annoying previously.