Mercenaries at Wayne Manor was a fun and fast paced way to start off the episode. Bad-ass action hero Alfred was the most exciting thing that has happened in this series so far. I knew from the pilot episode that Sean Pertwee was an excellent choice. The action sequence in the prologue episode was one of my favourite scenes of the show up to this point. It was very well-directed and choreographed, had a visually striking setting and therefore a great look, as well as some excellent stunt work. Sean Pertwee looked right in the action hero role, without diverting away from the character of Alfred at all. 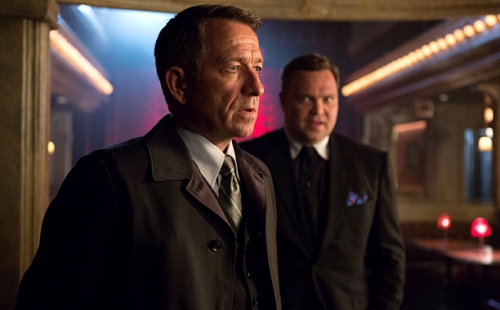 It was a refreshing change to have more of Alfred and Bruce than Gordon and Bullock. I really like Gordon and Bullock but I think Alfred is one of the strongest characters in the show and needs more screen time, Bruce is okay too. I actually find the writing and the story between those two very interesting, I am taking a while to warm up to the actor that plays Bruce Wayne but he is getting there.

The show wasted no time this episode in getting the ball rolling, after the prologue and the title sequence we were given a scene in which Alfred makes his intentions known to the GCPD. He intends to help them track down the people who have gone after Bruce and Selina. As soon as Alfred loaded a handgun and said he was going with Bullock I knew those two would have an excellent dynamic, and would be involved in some really fun scenes. I was right, the two played off each other exceptionally well and had a real presence in every scene they were in. They were charismatic and threatening at the same time, this comes as no surprise at all as Donal Logue and Sean Pertwee are both heavyweight actors.

The rest of the show was quite fun, however I found myself losing interest slightly in the scenes where Gordon looked into the murder of Thomas and Martha Wayne. The best parts of this episode were scenes between Harvey, Alfred and the crime bosses of Gotham’s criminal underworld, as well as the moments between Selina and Bruce. 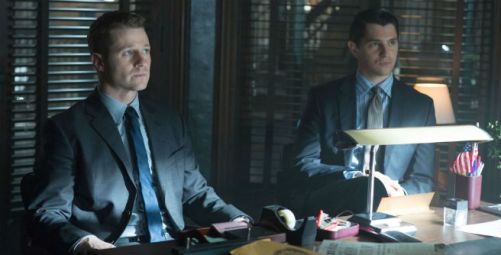 The scene in the GCPD police station at the end of the episode involving Mayor James, Harvey Dent and James Gordon was interesting indeed. It added a different and sinister element to the Mayor’s character. Previously he had at least made an attempt to maintain an air of professionalism. However, after the events at Falcone’s house he has abandoned the façade completely. He expressed anger at Dent and Gordon for disrupting the established order of the criminal structure in Gotham, he threatens them telling them that both of them will be brought down sooner or later. I am surprised and pleased by the turn of events at the end of the episode, with Gordon being posted to a position inside Arkham Asylum. Gordon working inside a building full of Gotham’s insane criminals should be fun, especially because for many of them Gordon contributed to their incarceration.