The first thing that struck me while watching Justice League War was how beautiful the animation looked, this DC animated movie triumphed in trying to visually bring these characters to life. Batman and Green Lantern were strategically picked to be the first members of the Justice League on-screen. The reason I say strategically is because these are the best two characters in terms of how well their action is done and how strong the voice acting was. Green Lantern’s constructs of will from his power ring looked gorgeous on the screen as a result of the hard work and passion of the animators. Here’s another reason that the writers chose to put Batman in the first sequence: Batman is the best acted character in the whole movie. Jason O’Hara really captures the essence of Batman in the tone of his voice, he brings his own performance to the table, making Bruce Wayne his own while also echoing and paying homage to the iconic voice actors to don the cowl of The Bat such as Kevin Conroy. I can’t stress how authentic Batman felt in this movie.

Green Lantern and Batman’s early interactions were a joy to watch, those two talking as they meander through the sewers had a really interesting feel to it. Especially because Green Lantern represents everything that is light, illuminating the grimy walls as a passes. While Batman does the exact opposite, wearing all black and grey trying to blend in with his surroundings and be the night.

The writing for Wonder Woman in her first scenes was really bad, Michelle Monaghan is a fantastic actress but she can only do so much with poorly written lines. I understand that Wonder Woman has to be withdrawn to our ways to some extent, but there is a difference between being a fish out of water and being completely wooden. The blame isn’t entirely on the writers however, I think Monaghan could have delivered those initial lines a bit better. Although to be fair there are some quite cool moments for the character later on in the animation, Monaghan’s acting skills come out a bit more in these moments.

The action scene where Green Lantern and Batman first meet Superman had some really well choreographed, smooth action. However I didn’t think it had the same edge as the action in some DC animated movies such as Batman: Under The Red Hood. In Under The Red Hood you can feel every punch and kick, the martial arts is authentic and brutal. The action was fluid and cool looking it just didn’t have the hard hitting visceral brutality of some of the Batman animations like Batman: The Dark Knight Returns.

I did find it odd that Superman would be trying to kick their ass one second then working with them as soon as Wayne calls him “Clark”. He stops dead in his tracks and looks surprised that Batman knows his name, but then refers to Batman as “Bruce”. None of that made sense. 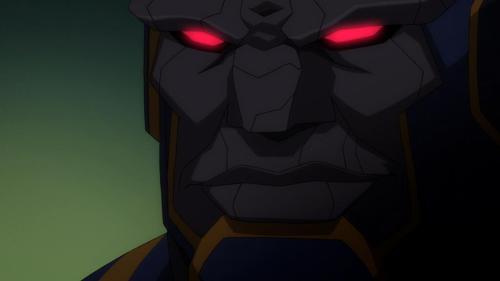 The script writers had real faith in the animators conjuring up some really imaginative and ambitious images for the art team to get their teeth into. I am of course talking about scenes such as Darkseid and his army flying over the city scape and the awesome fight scenes between him and the Justice League.

Shemar Moore the voice of Cyborg was another really strong voice acting talent in this, his back story was very compelling and provided some emotional scenes for the actor to perform. I found the character of Billy Batson a bit annoying with the odd cheese filled line, however his transformation to Shazam was awesome and thankfully he remains in that form for most of the remainder of the story. I found The Flash’s awkwardness actually really refreshing, his animation looked really cool particularly his combat scenes. It’s a shame they didn’t give him more screen time as he was one of the better written characters and his power could create some really cool visual moments, the animators could have done some really innovative stuff here if they had been given the opportunity. 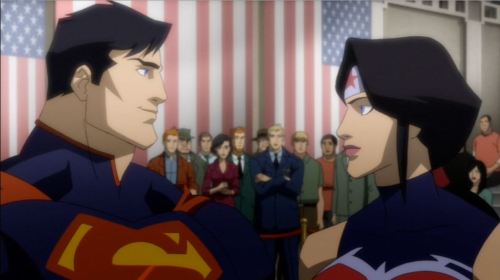 Darkseid had a very tangible physical presence and a really threatening voice, when I read Darkseid’s dialogue in the comics that is the voice I have in my head. To close I will talk about my favourite Batman scene in this movie, which was the speech he gave about what is really important above all else, right before he allowed himself to be captured. Batman being on the frontline, in the city when everything has gone to shit and doing something really bold is exactly right, that is the character spot on. Furthermore, Wayne being carried toward the enemy HQ before taking it down from the inside like a lone wolf was bad-ass.