This episode brought a third dimension to the character of Tuco Salamanca. In Breaking Bad Tuco was your average villainous gangster, in this episode he was this but pretending to be someone else. He is a mummy’s boy who is trying to uphold the image of the angelic son despite being a cold killer. Tuco trying not to let his mother know what he is doing while secretly having an armed stand-off was a fascinating idea. The breaks in tension in which Tuco’s mother appears, unaware of what is really happening were very funny. This show has a really unique and fresh style of humour. 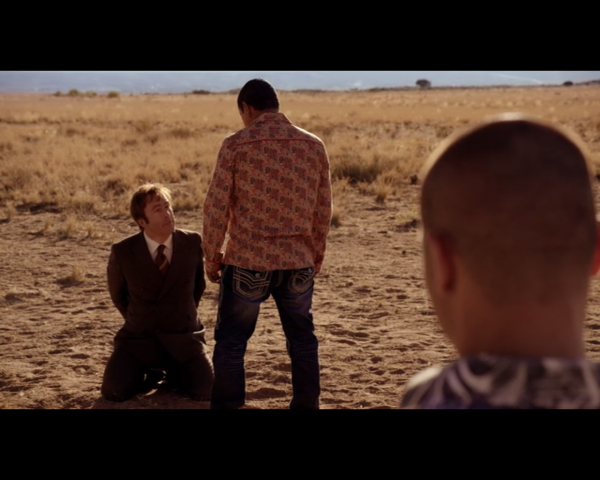 The following scene in the Albuquerque desert was reminiscent of Breaking Bad, it was a return to the modern-day western inflections of its predecessor. That whole long scene was very tense indeed, the leg breaking was pretty traumatic to watch. However, it was good to see James use his talking skills to worm his way out of danger. Saul seeing the bread sticks at dinner as snapping legs after what he had witnessed in the desert was a really clever addition.

There was a really cool montage in which we got to witness Saul at work, there were a number of funny moments here including his exchange with Mike, or as he refers to him “The Ticket Troll”. The ending scene was very interesting and sets up the eventual transition of Jimmy McBride to Saul Goodman, the criminal lawyer.

Better Call Saul seems to be a very versatile show that can be a different tone from week to week, it has a unique style that sets it apart from any TV show at the moment. I really look forward to what is to come in Better Call Saul, Vince Gilligan is an absolute genius it is fantastic that he is given another chance to tell stories in the Breaking Bad universe. However, having said that I do look forward to see what Gilligan will do with a different set of characters in the future.