What a way to start an episode. We are taken back to the night of Barry’s mother’s murder 15 years ago. Outside Barry’s childhood home a streak of red lightning shoots out of a wormhole in time followed by an orange one. This show is comic books come to life, its amazing. We witness the moments on that night in slow motion. Before, all we saw were streaks of lightning chasing each other around in a whirlwind of light surrounding Barry’s mother. This time we got to see what is causing that effect; Barry and Thawne fighting each other so quickly that they are a blur to us mere mortals, all that is visible is the electricity that sparks off them as they access the Speedforce. 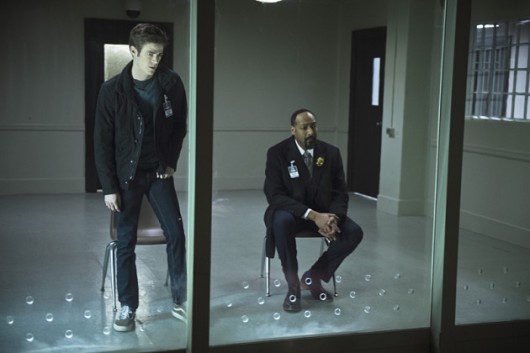 Snap back to present day and The Flash’s secret identity, Barry Allen and Joe West are going over an evidence board in Barry’s lab. They are taking justice into their own hands, investigating Harrison Wells, or shall we say Eobard Thawne. This investigation is what will inevitably lead to The Flash having a showdown with Reverse Flash, in which they both go back in time. This is what we saw just a second ago, Thawne running back in time to kill Barry’s mother, Allen following him back to that night to stop him, change history and prevent his mother’s murder from ever happening. This show never lets up for a second, its incredible.

The Trickster’s first attack went from 0-100 real quick. What looked like a fairly harmless and fun thing turned into terror immediately. The soundtrack choice was very clever; it sounded like circus music, mischievous. This episode featured a new copy cat version of an old criminal that has since been forcibly retired. The villain in costume we see at the start of the episode has named himself after a previous villain who got up to the same kind of antics. What is interesting is the actor playing the original Trickster actually played Trickster in the original TV series of The Flash, which ran from 1990 to 1991. You may also recognise him as Luke Skywalker. What’s more is John Wesley Shipp who plays Henry Allen in this, played Barry Allen in the original series. Bringing the actors back who were involved in the first Flash TV show in cool ways that pay homage to the old incarnation is awesome.

Every so often we would step back in time 15 years, every time this happened I found myself excited to gain more information on the story, the origin of the characters is a constant mystery to fans. We got a huge twist not even 10 minutes into the episode. Reverse Flash sprinted away, ripping his mask off in anger it is revealed that Tom Cavanagh is not the one underneath the mask at the scene of the crime.

Mark Hamill’s performance as The Joker in Batman animated TV shows and movies is considered the definitive version. His Joker voice is one of the best ever. It’s great to see him back in the DC Universe playing a very similar role. He actually put on a similar performance as that of when he is playing The Joker. Hamill was fantastic in this episode, his scenes were gripping, dramatic and reminiscent of Silence Of The Lambs. There was an interesting flashback scene in which we saw Wells and his wife and the origin of the name: S.T.A.R Labs. What was even more interesting was the camera pans around and we see the person we saw unmasked as Reverse Flash earlier. The twists in this episode came out of nowhere.

This time it was Luke Skywalker in the villain role telling someone he is their father. This twist that the old Trickster is the father of the new one was definitely a call back to Mark Hamill playing Luke Skywalker in Star Wars and of course the iconic scene between Luke and Vader.

We got another of those really cool moments where Barry unlocks another stage of his abilities, this moment was made that much better by the music and of course Tom Cavanagh’s speech. The minute you think you know the situation in The Flash the writers change the game entirely. The face changing thing with Eobard Thawne and Harrison Wells is a prime example, that was insane. 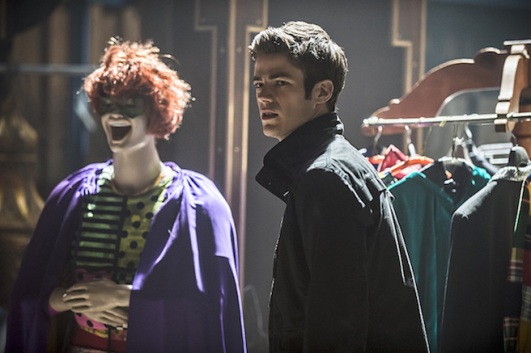 This episode was huge, everything happened and going into this episode I expected your average villain of the week episode. You would expect plot twists and reveals like that to happen in a season finale. The Flash season 1 episode 16 was fantastic television, this is quickly becoming one of the most exciting shows on TV at the moment. It was gripping and really captured my imagination. We are really kicking into gear for the last leg of the season now, I’ve no idea how they are going to make things in the finale even bigger than the mid-season finale.