Only in this show do you get a scene where a superhero who can run faster than the speed of light fights a talking gorilla with the power of telepathy. I just watched Grodd Lives, the latest episode of The Flash and what an episode it was.

I really like the intro for one, a nice way to open the episode given what happened in the climax of last week’s episode. Some really nice shots of The Flash running through the city with narration from Iris. Iris showing up at S.T.A.R. LABS when Barry is still in the costume and revealing that she knows he is The Flash was a big moment but could have perhaps been executed with a bit more gravitas. But I am glad Iris is now in on it, one of the things that occasionally annoys me in superhero related TV shows and movies is the side of the story where the hero is trying to keep their identity a secret from those around them. They often drag it out, falling into the same tried and tested clichés. 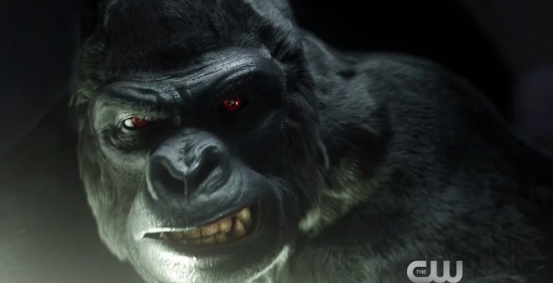 The three scenes we got focussing on Eobard with Eddie as his captive were fascinating. Mostly because Eobard Thawne is so interesting, we know so little about him and yet he is one of the best characters. About a minute into the episode I was waiting for us to return to Wells’ hideout to see what he is planning, it is a shame we only got three of these scenes. How could you not be desperate to see where that story is going? Especially after what Wells said at the end of the previous episode. Tom Cavanagh’s Eobard Thawne seemed very threatening in the first of the scenes focussing on that plot. When he deliberately intimidated Eddie, rushing across the room to get in his face with glowing red eyes he was actually terrifying. Reverse Flash is actually an unnerving presence in every episode.

Even the scenes focussing on the relationship stuff were actually really well done. The writing was really good and Candice Patton’s strong acting alone basically carried those scenes. General Eiling’s reappearance threw the cat amongst the pigeons big-time. We already knew that Grodd would feature in this episode and that Eiling was dropped off in his lair at the end of a previous episode. If you have a scene where the character’s creepy possessed voice is the focus of the scene it is a good idea to choose Clancy Brown. He has arguably one of the best voices in acting, illustrated by how much voice acting he has done in animated TV shows and movies actually based in the same universe as this series. He is actually the definitive, most recognisable and authentic voices for Lex Luthor in animated DC shows.

The hunt for Grodd in the sewers had a really cool atmosphere. It was like something out of a creature feature horror film. The scene where Grodd started picking them off was very tense. The visions Barry was having at the start of the episode were nicely explained by Grodd’s telepathy. I like when this show puts a plot thread out there that seems to just hang there for a bit with no explanation but later neatly threading it into a bow. Grodd was fantastic, you really got an idea of what kind of physical presence he has when you could hear his booming footsteps and when he blocks out light sources when he moves. There is possibly nothing more dangerous than a giant intelligent gorilla that can control your mind. This was illustrated well by Jesse L. Martin’s fantastic acting in the scene where he was at the mercy of Grodd. I wouldn’t blame him for crapping his pants when his own hand tried to kill him like something out of Evil Dead 2.

Could Eobard have told Eddie about Barry and Iris’ future as motivation for him to hate The Flash. This being in preparation for when Eobard presumably gives Eddie the power of the Speedforce. Just a little nit-pick: Why did Iris ask about the diagram? On the screen it showed Barry’s location and Grodd’s marked with beacons on a map as they both have been fitted with a tracking device. She asks: “So the red is Barry and the blue?” Caitlin replies: ” Is Grodd.” What was the point in asking that when the different coloured map markers are clearly labelled with the two names? I initially got excited when it looked like the super sonic punch might make a return but the result of that scene was cool in a different way. The moment where Grodd caught the fist and threw Barry was awesome. The fight scene between Grodd and The Flash was incredible, this is the kind of thing you see in big budget movies. The Flash punching at super speed before being picked up by his neck by a giant gorilla and being thrown through a brick wall, was just insane. I must stress how much fun this fight scene was.

The CGI on Grodd was really good despite being entirely made up of effects, in some moments particularly the instance where Grodd grabs Barry by the neck he seemed to be solid, like there was something actually there. Grodd scaling the building at the end was absolutely amazing. An homage to King Kong but bad ass as its own standalone thing. How on Earth do the writers pick up the pace of the entire series in just one short scene at the end of an episode?

This was another brilliant episode of a consistently strong TV show. Lots of fan service and generally just fun superhero based television.