Before I begin I should warn you that this is going to be an in-depth review and will contain spoilers. In order to give a full idea of my experience with this movie I have to discuss plot points and revelations, so only read this if you have seen the movie already. You know a movie is amazing when it lives up to a colossal amount of hype. Star Wars is a massive cultural reference point, it is probably the biggest franchise in history and is synonymous with film. I understand that the epic trailers and million dollar marketing campaigner probably had no effect on some people. However I personally had very high hopes for this film as I have been a fan of the series since childhood. I am very invested in the series and it is very important to me. As a fan I can say that despite the lofty expectations this movie did a perfect job of reinvigorating the franchise while rekindling that old magic.

J.J. Abrams has done a sterling job of paying tribute to the series’ roots while putting his own stamp on it. The Force Awakens was pure fan service, it had all of the cinema magic of the original trilogy while giving fans something new to sink their teeth into. Harrison Ford, Carrie Fisher, Mark Hamil and the rest of the returning originals have certainly not lost it. Han Solo and Chewbacca stepping back onto the Millennium Falcon again was an incredible moment, in this scene particularly, Ford proved that he can still spellbind an audience by simply raising an eyebrow. In the theatre I saw the movie, Chewbacca’s roars at the right comedic moments provoked some laughs. As did some of BB-8’s antics, in particular the moment that he used his arm with the lighter on the end as a way of putting his thumb up. Speaking of BB-8, he was the real star of the film. It is amazing how they have made a robot so emotive. At times he seems to have expressions and feelings. Seeing Solo and Chewie again was a special moment, it felt like “We’re home” was not just about Solo and Chewie being back on the Falcon but also, the fans being back in that universe at long last. 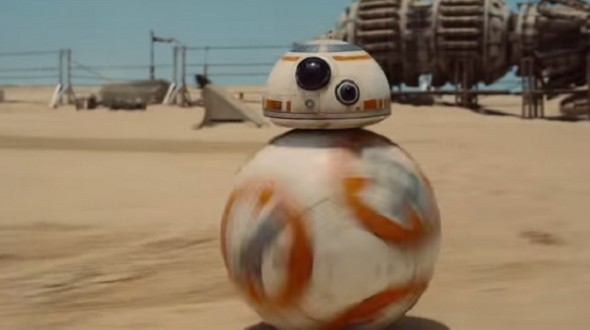 As much as The Force Awakens is a throwback to the original trilogy it also ushers in a new era for the franchise and the additions made in this movie are marvellous. John Boyega and Daisy Ridley do an incredible job, the future looks bright with these two as the new generation. Neither of them will be in need of work after the star power and sheer acting ability they exhibited here. I really like the character of Finn, the character is very fresh. We have never seen a stormtrooper have a crisis of conscience in Star Wars before. He was very relatable as he seemed to have a general aura of not knowing what the fuck he is doing but when the time came to step up he was a believable action hero. Even though he was ultimately not as strong with the force as Rey I found myself rooting for him to be the next powerful jedi. As to that, it was an interesting idea to make the audience believe he was the next powerful jedi. It was an interesting idea to make the audience believe he was the next chosen one and then flip it in the third act. Rey was also a very compelling character who the audience connected with as they witnessed her hardships and saw how strong she has to be. Oscars Isaac was also really likeable as Poe, it seemed to me that he is the new version of Han Solo. He is the new capable badass who saves the newbie hero when he messes up.

It was pure genius of the writers to make a mythical figure of Lake Skywalker. It is the next logical step for the character’s arc. In A New Hope Lake was the clumsy protagonist, still learning in the ways of the force. He was still inexperienced in Empire Strikes Back but when he returned at the beginning of Return of the Jedi. He was the cool, calm and collected action hero. The Force Awakens adds another chapter in his story making him a jedi master that has chosen to exile himself after a tragic event. Fascinating stuff, it made him the driving force pushing the story along despite the fact that he only appears in the very final scene. We also have a couple of badass new villains. Kylo Ren is a fantastic antagonist; he has one of the coolest lightsaber designs, a really cool mask and he is a compelling character. All of the best villains are conflicted in some way. He occasionally feels the pull to go back to the light side, this is made even worse by the fact that he is Han Solo and General Leia’s son. Easily the best scene in the movie was the heartbreaking moment when Kylo Ren killed Han Solo. Solo’s death would have been upsetting in itself but Ren’s reluctance to kill his own father as well as the remorse and sensitivity he showed exacerbated this. General Snoke is a very enigmatic and intimidating villain. It seems the Emperor is gone for good and has been replaced by another master manipulator. He appeared to be absolutely enormous, given that the holograms are usually an accurate representation it would seem he is that huge in person.

The destruction of the Starkiller base and the showdown with Ren was an exciting conclusion, all be it similar to that of A New Hope. The Starkiller base is very cool, I love the idea that it drains energy from the sun and uses it to destroy a galaxy. Kylo Ren vs. Rey and Finn was incredible; stylishly shot and well choreographed. I like that Finn’s fighting style with the saber is very brawly and wild, consisting of big heavy shots. Alternatively Rey’s attack style is more measured, striking with the point like a fencer. There was also a big moment in this fight. Rey was essentially revealed to be the next chosen one. She succeeded where Finn failed, despite the fact that she refused to be a part of the jedi way earlier in the movie she tkes on Ren with Luke Skywalker’s old lightsaber. I am of the belief that she is actually Luke’s daughter, it would explain her connection to the force and the mysterious absence of her parents.

Furthermore, when the lightsaber comes to her, which is evidence in itself, the Skywalker theme plays in the background. This would also explain the vision Rey has when she touches the lightsaber in the basement. Could it be that the crying little girl in the vision is her and the woman holding her hand is her mother? But where is her mother? Could it be that she died at the hands of Kylo Ren or one of his followers? So many mysteries were out forward teasing us to come back for the following instalments. There are a number of unanswered questions: What happened to The Knights of Ren? Who is General Snoke and is he that massive in person? How did C3PO get that red arm? This long anticipated return was a joy from start to finish and only makes me want to see the next instalment and spin-off more.