The scariest thing about The Conjuring 2 is the British weather and the eighties fashion.

The first and possibly key thing to note about The Conjuring 2 is that it is a vast improvement on it’s predecessor. Although not without it’s flaws, in my opinion the sequel surpasses the previous instalment for a couple of reasons.

The most important difference is that it is far scarier, using smarter techniques and drawing out more jumps. The writing was a lot stronger this time and the location was a step away from the usual. In that most paranormal horror movies at the moment are set either in American suburbia or in an old house in the country that a stereotypical American family have just moved to. 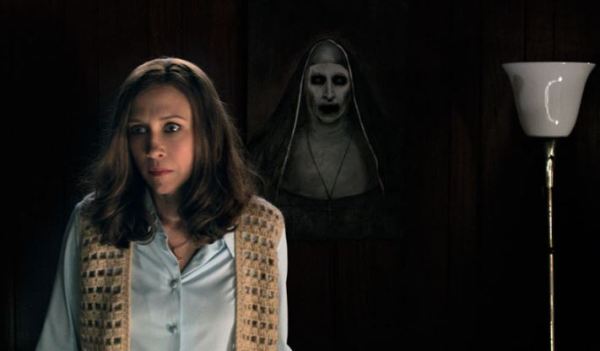 I felt that the characters were quite compelling, there is a tendency in this genre to retread old ground but the British family in this movie did actually feel quite authentic. This is not only part of making a well-rounded film but also a way of making it scarier. If you relate to the characters you want them to survive the ordeal.

Vera Farmiga and Patrick Wilson are great as Ed and Lorraine Warren. The ghost hunting couple are in the story not just because of their involvement in the ‘true’ story but also for a theatrical reason. This being that they are the reassuring presence. You need some light even in a horror movie.

With all of that being said, the horror techniques were slightly thin on the ground. It was mostly long moments of quiet followed by a huge bang or the ghost suddenly appearing, jump scares. It can be lazy to just rely on these tried and tested tricks. I prefer when a movie combines these kinds of scares with creepy imagery and inspiring fear through clever writing.

However, one thing that I do like about this franchise is that each movie is based on a supposed true story. A lot of horror movies of course claim to be based on a true story in the beginning but what is so interesting about this franchise is that they are focused on a high-profile incident. The real Enfield case was obviously nothing like the chaos we saw in the third act of this film. It was more like things going missing and a girl apparently speaking with an old man’s voice.

The film was most successful when it went back to classic horror with the scene in the Warren’s house as Lorraine was terrorised by the demon in the painting. That was far more unnerving than the special effects heavy set pieces involving The Crooked Man etc.

The writers have now established the idea that the Warrens have a wealth of cases to explore, combine that with strong box office results for this instalment and a third film could well be on the cards.

To summarise, this is a relatively strong horror outing that brings big-budget Hollywood gloss to an average British street. But if you are looking for something really terrifying, this film isn’t it, none of it will really stay with you.