Alan Moore’s classic comic book tale is adapted here in one of the darkest DC animations to date. In my opinion, this animated movie exhibits the definitive version of The Joker. If Moore’s incredible writing wasn’t enough, Mark Hamill’s performance elevates the character to it’s peak.

Hamill delivers his magnum opus in regards to The Joker. If this is to be the last time that Mark Hamill wears the make-up, it would be very fitting as the story serves both as an origin story and a bitter-sweet conclusion. 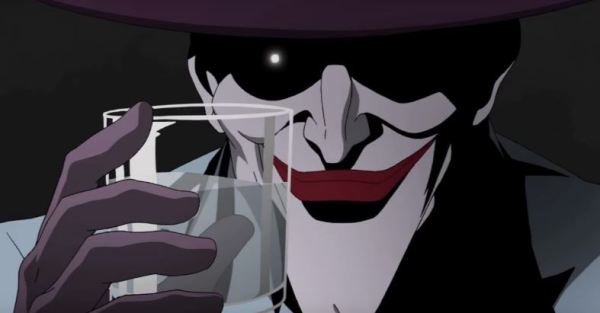 Mark Hamill could be the best voice actor in the world and he puts on an absolute masterclass in The Killing Joke. He throws himself into the role, fully committing to the clown prince of darkness, he simmers with pure evil. During the flashback scenes he puts up warning signs to what the evil entity will become while still taking on a polar opposite personality.

The Joker’s previous persona is a victim of circumstance, beaten down by life; Hamill’s voice drips with self-loathing in every word. From one iconic role to another: Kevin Conroy dons the cowl once again.

Conroy does not quite get to explore his acting range the way Hamill does in this movie but he puts on a strong performance nonetheless. Like Hamill as The Joker, Conroy’s voice behind the Batman mask is as authentic as it gets. If this is the last time Conroy faces-off with Hamill, it is fitting that this is their final story.

As for the extension of Barbara Gordon’s part in the story, I do not understand the controversy. If anything this adds to the character and makes the audience more invested; making what happens to her ultimately more effecting. If I am honest I did spend some of it waiting for the main story from the comic to kick in but as I mentioned it was good character development.

Once the main story did get going it was every bit as creepy, gripping and uncomfortable as it’s source material. The Joker’s attempts to drive Commissioner Gordon insane was deeply unnerving and it all led to an epic final showdown.

The final moments were appropriately bizarre, provoking a mixed reaction. As Batman and The Joker laugh together there is a feeling that the world has gone topsy-turvy, that something has gone very wrong. Appropriate that the fight began in an upside-down room. There was also the feeling that this strange and messed up relationship is about to come to an end in an ambiguous off-camera moment.

If this is to be Mark Hamill’s last outing as the voice of the iconic villain he is certainly going out with a bang. If you enjoyed this review please share it with your friends!