’13 Hours’ chronicles an attack on an American base in Benghazi by Libyan militants. It tells the true story of the secret military personnel that were stationed there as they were tasked with protecting U.S. diplomats.

I must admit, I did not know this was a Michael Bay movie going in, I only noticed his name in the final credits. I do not watch a lot of Michael Bay movies, although the Transformers films are a guilty pleasure of mine. The reason I do not watch many of his films is because I find him quite problematic as a director when it comes to subjects such as this. However, this movie was actually a very good watch, with considerable negatives too.

The fact that Bay was behind this explains the issues I had with the movie. I had a split reaction but Bay’s direction explains some of the issues and observations I had while watching. With that said, I did go in with an unbiased mind as I did not realise who directed it initially.

Let’s start with what the film did well. The protagonist, if you can use that word with a true story, is Jack Silva. The extremely sympathetic character is the audience’s entry to that world and he is played by the always expressive, John Krasinski.

I initially felt like the movie was showing his good aspects only but this was addressed later on in the movie. Krasinski did not let himself down with this role. A superb performance as always.

It is visually quite beautiful, there are some great shots of very striking locations. There is also a motivational feeling to some parts of the movie, perhaps it is the testosterone fuelled, tough guys in the desert fighting bad guys aesthetic. I have to say, I enjoyed the sweeping shots of speeding convoys, this is a typical technique of Bay’s which was explained when I realised he directed it. 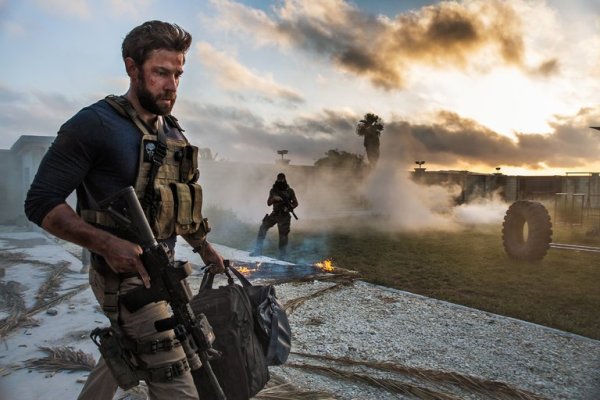 It admittedly felt a bit strange having the action movie reaction to a true story. I feel that the movie sensationalised the events somewhat. There was also explicit detail on the injuries and deaths to the point of gratuity. This felt somewhat disrespectful to the real lives lost. I also felt that Bay portrayed the Libyan fighters as monsters, it was like a video game, the heroes shot the villains and there was no cost.

Bay neglected to show the humanity on the other side of the coin. In fairness, this was addressed at the end of the movie. However, it felt like an after thought, it was tacked on so that they could say they did it. ’13 Hours’ felt like tough going towards the end, very intense of course due to the subject matter so it would benefit from a shorter running time.

Overall, it was a good watch but would have been amazing had Bay avoided his usual gratuity and sensationalism. Without the usual grubby, seedy stench of  a Michael Bay war movie, it could have been superb.