‘Vertigo’ is like a window into another world. Alfred Hitchcock’s identity mystery captures the glamour and beauty of 1950s San Francisco whilst plunging you into a melon twisting mystery. Like many classic movies, ‘Vertigo’ throws it back to a simple time and it is hard not to get stars in your eyes watching it.

I find the set dressing beautiful, the green screen and effects are hammy but it is spell binding nonetheless. These quirks of the film make it all the more charming.

This film is an example of writing and directing intricately weaving together. The theme of Vertigo, an issue that plagues the protagonist, links in to feelings of confusion and anxiety. The same feelings that the main character feels as the mystery unfolds around him.

The world spinning around you connects to dream-like qualities and being unable to trust your eyes. It is no accident then that the camera lazily drifts around the sets. Hitchcock snake charms the audience, entrances you, drawing you into that world. Despite this movement of the camera, we catch all of the skyline’s details. 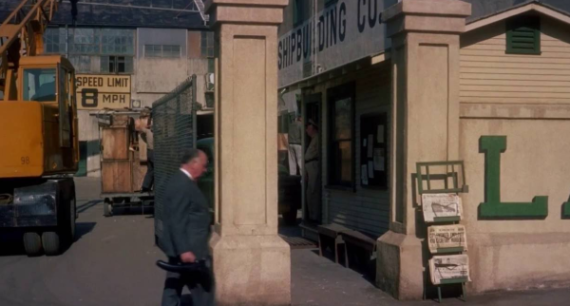 As we drift through the stylish sets, the huge window panes show us the majestic San Francisco skyline outside. The images outside are green screen but it adds to the effect. We are falling through portal after portal, deeper into the past. Much like Scottie’s falling dream as he falls into a grave…and beyond, into eternity.

Kim Novak plays Madeline, a femme fatale despite being the victim of the story. She is dazzling, which is fitting given that she ensnares Scotty, getting him in over his head. She is the siren on the rocks that lures Scottie to his doom. 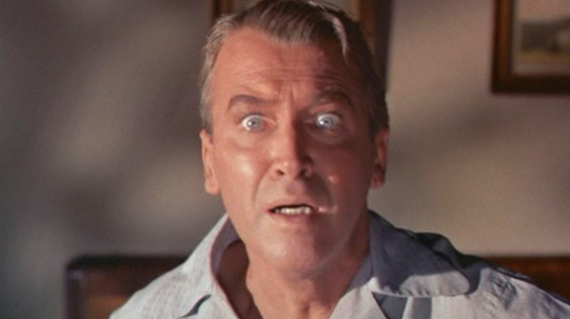 James Stewart is fantastic as Scottie. This is a movie from the late 1950s so of course there is a retro over-dramatic style to the acting but Stewart has some great moments nonetheless. Stewart acts with an expressive and emotive face. This is aided by the strange quality of classic movies that brings out the actors’ faces. As Scottie’s mind becomes unhinged by the events of the story, Stewart’s acting subtly evolves with it.

It can get tough going in the middle due to the fairly slow pace. I had to watch it in two instalments. With that said, this is exceedingly compact writing and film making. The vertigo theme is set up from the beginning and remains present throughout.

The foreshadowing is great; the biggest plot event happens as a result of something that is set up in the introduction. The mystery is solved in the third act but the main character becomes dark and unhinged as a result of his ordeal. He becomes controlling, replacing the villain and returning to the scene of the crime, his madness leads to the death of his lover once again. This all gives the feeling of things coming full circle.