Not only that, eighties is very in right now. This movie has all of those eighties tropes that give you that nostalgic pang.

The dream-like atmosphere is asserted from the first scene. We see a girl delivering a monologue in the countryside, she is dressed like a medieval princess.

The illusion is shattered when she takes off the costume and runs out of the park into a modern town. This blending of fantasy and reality sets the tone for the rest of the movie.

This is a primary theme in the story, as a journey into another world. The influences are clear, ‘The Wizard of Oz’ is even on Sarah’s bookshelf.

Jim Henson has a legacy of creating visual wonders in TV and film. Labyrinth is a key touchstone of that legacy. The puppets and animatronics are incredible, nobody can give them life like Jim Henson.

The goblins are really emotive and the great thing about groups of non-human characters is that they can each express a character trait. One can be the aggressive one, another can be the cowardly one etc. The practical effects are a joy, especially the transfiguration moments.

Like in the best kind of fantasy, Sarah steps through a doorway in the mundane world and enters a dream land. Henson’s imagination runs wild here. He creates a living world with a food chain of creatures. The Labyrinth has an eco system from insect-like wall life to sentient people. 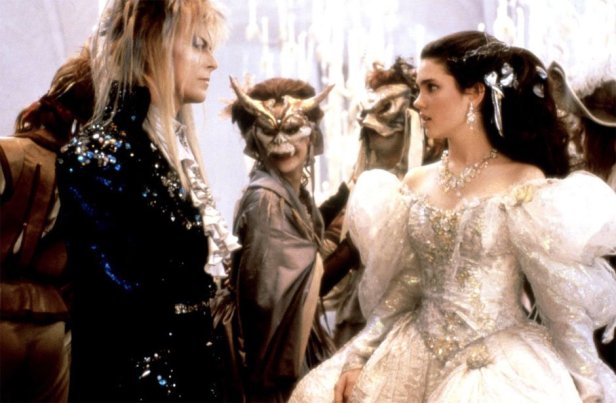 By definition, a Labyrinth is a puzzle. This is at the heart of the movie. Optical illusions and confusing architecture are utilised, playing with space and depth.

Sarah and Hoggle are great characters but Jareth is the star of the show. It is difficult to imagine anyone playing ‘The Goblin King’ as well as David Bowie.

The high drama and theatricality is great. Labyrinth is unashamedly flamboyant. David Bowie’s otherworldly charisma thrives. Bowie and Henson live on in this beautiful film.