Per BoxingScene, Manny Pacquiao has claimed to boxing media that the Floyd Mayweather rematch could be signed this week.

Floyd Mayweather returned to retirement in 2017 after defeating Conor McGregor in a cross-promoted money match. A rematch with old foe Manny Pacquiao, who has remained active, seemed to be a million miles away.

I’m coming back to fight Manny Pacquiao this year. Another 9 figure pay day on the way @mayweatherpromotions

After all, Mayweather’s motivation for facing McGregor seemed to be breaking Rocky Marciano’s record of 49-0. Not to mention the money.

Needless to say, when Mayweather popped up on social media this weekend to challenge Pacquiao, many dismissed the idea. Mayweather is known for making claims that keep him in the headlines without intention to follow-through.

It is quite a shock then that the rematch could be very close to being set: “There is a big possibility. He wants to come back, he wants to get my belt”. Pacquiao of course holds the WBA regular title.

The welterweight legend has told boxing reporters that the bout could take place on December 1st or the 8th. Whether his next opponent is Mayweather or not, his next outing will be finalised this week. 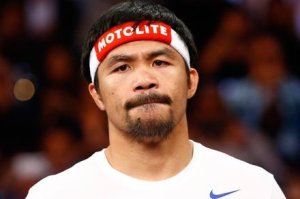 “We’re going to finalise my next fight this week, either Mayweather or somebody else, where and when, what date. There’s also Amir Khan, Terence Crawford, Adrien Broner”.

Crawford, WBO champion, is defending against Jose Benavidez this October. It is unlikely that he would make such a quick turnaround as December.

Between Khan and Broner, Pacquiao is obviously going to pick Mayweather. It is a much bigger payday, perhaps nine figures is optimistic for Manny, contrary to Floyd’s claims. He would certainly make more with Floyd than the other options though.

Pacquiao was carrying an undisclosed shoulder injury during the first encounter. The Showtime All-Access video showed Floyd visibly bothered when Pacquiao revealed the injury. Perhaps he wants to definitively prove that he is the better fighter.

Most people are asking: why should we care about this? It is understandable, the rivalry was over-marinated going into the first fight.

Brook vs Khan, which has no obstacle if this rematch happens, provokes a similar fan reaction. Fans complain that Pacquiao/Mayweather and Khan/Brook have been discussed too long. However, there is a reason we are talking about them.

One thought on “Pacquiao: Mayweather Rematch Could Be Finalised This Week”